I’ve often heard, I wish I could say it’s forgiven and forgotten—but it isn’t. As much as I’ve tried—all I feel is the anger and the bitterness.

Without forgiveness, bitterness is all that’s left! Maybe it’s an old wound. A parent abused you. A mate betrayed you. And you’re angry. Perhaps the wound is fresh. The friend who owes you money just drove by in a new car.  The boss who hired you with promises of promotions has forgotten how to pronounce your name. And you’re hurt! There’s a fire burning in your heart. It’s the fire of anger. And you’re left with a decision. Do I get over it or get even? Do I let my hurts heal, or do I let hurt turn into hate? Proverbs 15:9 says, “The Lord hates what evil people do, but He loves those who do what is right.”

From Grace for the Moment 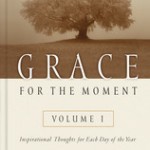